From I, Coriander to Invisible in a Bright Light, Sally Gardner’s first middle grade novel in 14 years soars with the imagination of a master story-teller. A pitch-perfect story about a crystal chandelier that splinters into a thousand pieces, a girl abandoned as a baby on the steps of an opera house and a dangerous game called the Reckoning.

It is 1870: opening night at the Royal Opera House in a freezing city by the sea, where a huge, crystal chandelier in the shape of a galleon sparkles magically with the light of 750 candles.

Celeste, a theatre rat, wakes up in a costume basket from what she hopes is a bad dream, to find that everyone at the theatre where she works thinks she is someone else.

When the chandelier falls, she is haunted by a strange girl who claims to know Celeste’s past and why she must risk playing a game called the Reckoning to try to save the people she loves.

So, having read that, you can hopefully see exactly why I had to read this book and jumped at the chance to be involved in the blog tour!

I wasn’t too sure what to write about today; of course I will review this book but I wanted to do something a little bit different to what I usually post! I was having a think and then thought that I’d do a bit of a discussion post where I talk about why I think books like Invisible in a Bright Light are necessary and why the synopsis is something that appeals to readers at both the target age and beyond.

Invisible in a Bright Light reminds me a lot of some of my favourite books such as The Diamond of Drury Lane, The Golden Butterfly and even YA books such as Caraval! The common theme: theatres, magic and danger. This is exactly why I was so excited to read this book; I adore middle grade books with these themes and there’s just something about them that is appealing and gripping. These books are very character driven but also combine with a fantastic plot that just keeps twisting and turning thus making it a read that you just can’t put down! Invisible in a Bright Light is no exception – I was hooked from the beginning with the intricate storytelling and wanted to know more about the characters and who they were.

So why do these themes appeal to readers of all ages? I think it’s the same as why films such as The Greatest Showman and The Prestige are so popular – they allow you to become lost in a world that’s not so far from our own and is full of the unknown and we are curious creatures! However, at the same time the characters are real and relatable. There’s just something about magic that captures the imagination! This is the same whether you’re eight or whether you’re twenty eight.

Books like Invisible in a Bright Light are so important because they do have this broad appeal and they’re the kind of story that’ll engage readers. For the target age, it’s the sort of book that really allows them to use and develop their imagination, and even for older readers it does this too! There’s mystery and intrigue to keep you guessing throughout and the writing style is beautiful and with just the right amount of detail to allow you to imagine the story perfectly.

Invisible in a Bright Light publishes on Thursday 17th October with Zephyr and is available to preorder now!

This blog tour is filled with lots of my favourite other book bloggers, and so I’d definitely recommend checking out their posts which will either be live now or appearing this week! 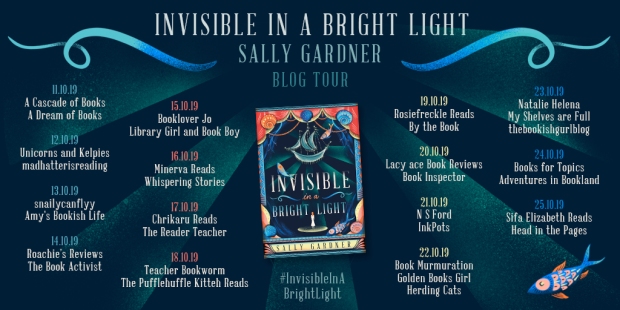 Thank you to Jade at Zephyr for the proof of this book and for inviting me to take part in the blog tour!