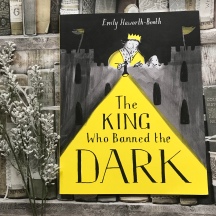 An illuminating tale of power, rebellion, darkness and light

He would ban it.

When the King bans the dark completely, installing an artificial sun, and enforcing “anti-dark” laws, it seems like a good idea. The citizens don’t need to worry about any of the scary things that might live in the dark.

But what happens when nobody can sleep, and the citizens revolt? Will the King face his fears and turn the lights off?

The King Who Banned the Dark is a beautiful and thought-provoking story about how we need the dark in order to enjoy the light.

I love beautiful picture books that use a limited colour palette, like The King Who Banned The Dark. Immediately, I was drawn to read it, and I’m very glad that I did because I’ve found a new favourite! The illustrations, whilst simplistic, are lovely and make for a very enjoyable read.

The King Who Banned The Dark is a story that can have different interpretations; on a simpler note it can be about how we need the dark as well as the light, making it a wonderful book about the fear of the dark and appreciating the beauty of the light. On a deeper level, as I’ve read in a few places, this book can be interpreted as being a bit more political – people have got power and can revolt against decisions taken by the leaders which may not be for the benefit of the people, and how decisions can be manipulated.

I personally like to think of it as being the lighter option, making it a perfect bedtime story to be enjoyed time and time again!