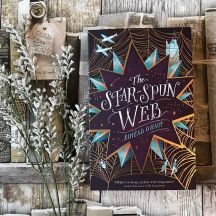 With her passion for scientific experimentation and her pet tarantula Violet, Tess de Sousa is no ordinary orphan. When a stranger shows up at Ackerbee’s Home for Lost and Foundlings, claiming to be a distant relative come to adopt her, Tess hopes to find some answers to her mysterious origins. But as she adjusts to her new life at Roedeer Lodge, it becomes clear that Norton F. Cleat knows more about Tess – and the strange device left with her when she was abandoned as a baby – than he’s letting on. And when Tess discovers that the Starspinner is the gateway between her world and a parallel world in which war rages, she realizes she may be the key to a terrible plan. A plan she must stop at all costs…

Sinéad O’Hart stormed into the Middle Grade scene last year with her fantastic debut The Eye of the North, so there were high expectations riding on her second book, The Star-Spun Web. Aside from the fact that Sara Mulvanny and Sophie Bransby have done a stellar job on the cover again (it’s BEAUTIFUL!), this book was just as engaging and enjoyable to read as book one!

The Star-Spun Web is a mysterious story full of magic, science and wonder…and, despite my intense dislike of spiders, I actually began to warm to Violet, Tess’ pet spider! It’s a book that I was always excited to get back to reading; I genuinely cared about the characters and was rooting for Tess! As a character, she is one of my favourites I’ve come across in middle grade books; she’s just the right amount of feisty, vulnerable and intelligent. It’s refreshing to have a female character who is so independent and inquisitive. That said, she also relies on other people at the right times, showing how we can think we can do something alone but actually we need other people sometimes to help, whether that’s from our family or friends.

I’m not sure whether this book is going to be a stand-alone; there is a lot of potential for a sequel in this world! I’d love to revisit Tess and all her friends, and discover what happens to the villains of the story too!

Thank you to Leilah at Stripes for sending me a copy of this book!

MY BOOK ARRIVED EARLIER THAN EXPECTED!! I’m so happy - I’ve been looking forward to this sequel since I read book one last year and I can’t wait to read Read With Pride! . . . #bookstagram #instabook #bookish #bibliophile #lovebooks #bookstagrammer #bookblogger #igreads #booksofinstagram #booksandflowers #lucypowrie #teambkmrk #thepaperandheartssociety #readwithpride #lgbt #teenfiction #teenbooks #bookclub #yalit #yabooks #teenlit
My Kendoll is the cutest! Our Paris trip to Disney for this year has been postponed to next year, which is both a sad thing and a good thing. We’ve managed to upgrade and save a bit of money at the same time, and we get a bit longer to save some spending money! . . . #paris #shopdisney #disneylandparis #disneygram #disney #minnieandmickey #mickeymouse #snowglobe #eiffeltower #disneysnowglobe
I have the best family and friends; being really ill (not corona related) during lockdown has been so tough but I’ve had some amazing people looking out for me. . . . #family #friends #familyandfriends #grandparents #mumanddaughter
I’m such a sucker for a book set in revolutionary Paris! I adored Enchantée when I read it last year, and I’d definitely like to reread it seeing as 2020 has a few books set in the same era coming out! . . . #bookstagram #instabook #bookish #bibliophile #lovebooks #bookstagrammer #bookblogger #igreads #booksofinstagram #booksandflowers #enchantee #gitatrelease #mykindabook #panmacmillan #yalit #yabooks #youngadult #youngadultbooks #paris
I loved making this pair of ears that were commisioned! Such a nice fabric and beautifully evil! . . . #minniemouseears #disneyvillains #craft #homemade #disneyears #mouseears #minniemouse #villainears #disney #disneygram #craftgram
Easily one of my favourite cookbooks! I love that each recipe has just five ingredients making them so much easier to make and afford, and to top it off there are some really yummy recipes in here! . . . #bookstagram #instabook #bookish #bibliophile #lovebooks #bookstagrammer #bookblogger #igreads #booksofinstagram #booksandflowers #slimmingworld #take5 #slimmingworldtake5 #5ingredients #healthyeating #easyrecipes #slimmingrecipes #recipebook